The Pine Edge is designated a Heritage Preservation Landmark. 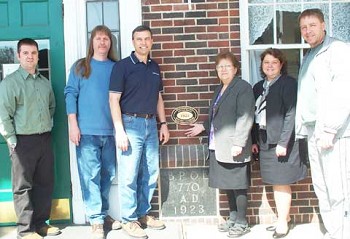 The “Pine Edge Inn” had its origin in 1923 when it was built by the Benevolent and Protective Order of the Elks 770, and was first known as the “Elks Hotel.” A plaque recognizing the builders of the Pine Edge is located at the entrance of the building.

The two-story structure with brick exterior faces Little Falls First Street to the east, and provides spectacular views of the Mississippi River and Maple Island Park in the west.

In 1927, seventeen rooms were added and, for a short while, the hotel was known as the Malcolm. Also in 1927, the hotel hosted Charles Lindbergh Jr.’s “Welcome Home” following his historic solo flight from New York to Paris in May 1927.

Brothers Jim and Jack Madden purchased the hotel in 1939 and renamed it the Pine Edge Inn to honor the start of central Minnesota’s great pine forests. For decades the hotel and restaurant thrived as a popular destination for travelers on their way to and from the lake country.

On the lower Level, ongoing restoration projects include the original Card & Billiard room along the north side and the Grand Ballroom which hosts over 200 guests for dances and receptions.

Nouis Home Care, Inc., a Little Falls-based family-owned and operated business, acquired the Pine Edge in October 2003. After a year of renovation, “Nouis Home at Pine Edge,” or just The Pine Edge, was opened November 15, 2004 as a 42-bed Board and Care with Special Services facility.

We’re hiring caregivers! Email us at jobs@nouishomecare.com to learn more.